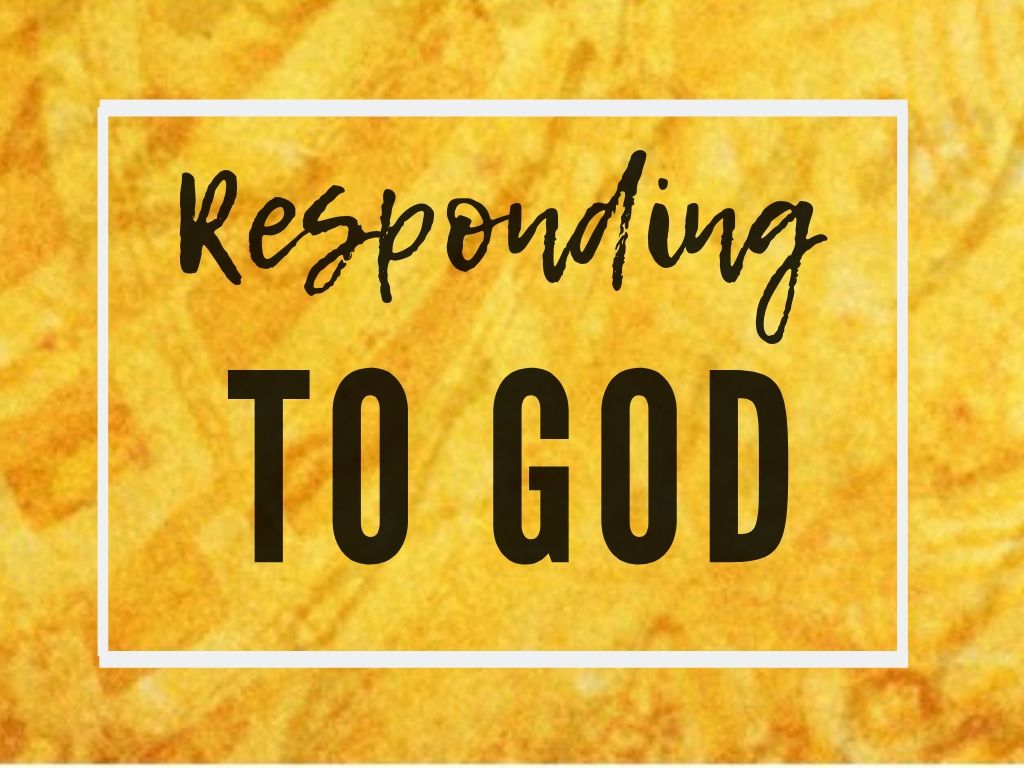 The Responsive Life – 3. A Lifestyle of Faith

Please know this series of messages is not about “having a better attitude”… Or a positive outlook on life. It is about learning how to live a life of responding to the Father.

2Tim. 4.7 (NKJV) I have fought the good fight, I have finished the race, I have kept the faith.

Rom. 5.17 (NKJV) For if by the one man’s offense death reigned through the one, much more those who receive abundance of grace and of the gift of righteousness will reign in life through the One, Jesus Christ.)

We are called to reign in life but that doesn’t mean…
There won’t be issues, detours, setbacks or stresses. It means that self, sin and circumstances don’t call the shots in your life.

Anxiety of today,
Fear of tomorrow,
Shame of yesterday,
Insecurity of who we are not,
Disappointment of how we wanted life to turn out
Bitterness toward those who did us wrong
Unresolved feelings toward God

WE have not learned how to respond to God alone…

There is one secret to the life of Jesus and is why He lived in freedom, Joy and peace – He lived a life responding to His Father.

Is. 26.3 (NKJV) You will keep him in perfect peace, Whose mind is stayed on You, Because he trusts in You.

A Lifestyle of Faith (trust/rest) is ME responding to HIM alone –
To WHO He is for Me
to what He has spoken.

Strong faith is all about intimacy.

Strong faith has NOTHING to do with circumstances. And everything to do with Who God is for you and who you are to Him.

Rom. 4.17 (NKJV) (as it is written, “I have made you a father of many nations”) in the presence of Him whom he believed—God, who gives life to the dead and calls those things which do not exist as though they did;
Rom. 4.18 (NKJV) who, contrary to hope, in hope believed, so that he became the father of many nations, according to what was spoken, “So shall your descendants be.”
Rom. 4.19 (NKJV) And not being weak in faith, he did not consider his own body, already dead (since he was about a hundred years old), and the deadness of Sarah’s womb.
Rom. 4.20 (NKJV) He did not waver at the promise of God through unbelief, but was strengthened in faith, giving glory to God,
Rom. 4.21 (NKJV) and being fully convinced that what He had promised He was also able to perform.

Think about an email that said “You are fired” but attached was an offer for a better paying job closer to home that you would be good at. That’s how faith sees life.

Well Justin I don’t know What God’s will is for me… There is a difference between Will, purpose and Calling… Let me explain…

God’s PURPOSE for us is that we would be a place He could dwell in by His Spirit to carry His glory in the earth.
God’s WILL is how He wants us to live in response to what we face.
God’s CALL is what He has for us to do For Him while on earth.

In order for us to fulfill these 3 things we must take on a disposition of servant. = one of surrender.

Bond servant is One who Sh’ma’s = Hears And Obeys…

The Hebrew word for Hear Is Sh’ma… It Means To… Listen For, Pay Attention To, Hear, Meditate Upon, Speak About, Cherish, Watch Over To Completion, Cooperation…

Rom. 1.1 (NKJV) Paul, a bondservant of Jesus Christ, called to be an apostle, separated to the gospel of God

2Cor. 4.5 (NKJV) For we do not preach ourselves, but Christ Jesus the Lord, and ourselves your bondservants for Jesus’ sake.

Gal. 1.10 (NKJV) For do I now persuade men, or God? Or do I seek to please men? For if I still pleased men, I would not be a bondservant of Christ.

Eph. 6.5 (NKJV) Bondservants, be obedient to those who are your masters according to the flesh, with fear and trembling, in sincerity of heart, as to Christ;
Eph. 6.6 (NKJV) not with eyeservice, as men-pleasers, but as bondservants of Christ, doing the will of God from the heart,

Phil. 1.1 (NKJV) Paul and Timothy, bondservants of Jesus Christ, ¶ To all the saints in Christ Jesus who are in Philippi, with the bishops and deacons:

Phil. 2.7 (NKJV) but made Himself of no reputation, taking the form of a bondservant, and coming in the likeness of men.

1Tim. 6.1 (NKJV) Let as many bondservants as are under the yoke count their own masters worthy of all honor, so that the name of God and His doctrine may not be blasphemed.

James 1.1 (NKJV) James, a bondservant of God and of the Lord Jesus Christ, To the twelve tribes which are scattered abroad: ¶ Greetings.

1Pet. 2.16 (NKJV) as free, yet not using liberty as a cloak for vice, but as bondservants of God.

2Pet. 1.1 (NKJV) Simon Peter, a bondservant and apostle of Jesus Christ, ¶ To those who have obtained like precious faith with us by the righteousness of our God and Savior Jesus Christ:

Jude 1 (NKJV) Jude, a bondservant of Jesus Christ, and brother of James, ¶ To those who are called, sanctified by God the Father, and preserved in Jesus Christ: