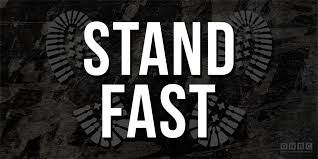 The only battle the believer has is to remain steadfast in the “rest” of God.
Adam first day!

I am not trying to GET something or GET somewhere… I AM STANDING IN A PLACE OF REST = PEACE AND JOY!

Eph. 6.10 (NKJV) Finally, my brethren, be strong in the Lord and in the power of His might.
Eph. 6.11 (NKJV) Put on the whole armor of God, that you may be able to stand against the wiles of the devil.
Eph. 6.12 (NKJV) For we do not wrestle against flesh and blood, but against principalities, against powers, against the rulers of the darkness of this age, against spiritual hosts of wickedness in the heavenly places.

Satan/Devil… Steal Kill & Destroy… How? Coming to Deceive, To Falsely Accuse & Slander
***(Picture Of Casting Or Throwing A Ball Against A Wall Over And Over And Over)

Hos. 4.6a (NKJV) My people are destroyed for lack of knowledge.

You cannot effectively fight the good fight of Faith without Knowing Who God is and who you are too HIm and understanding how the enemy works.

2Cor. 2.11 (NKJV) lest Satan should take advantage of us; for we are not ignorant of his devices.

Devices… Refers To An Orderly, Logical, Effective Arrangement, Usually In Steps Followed To Achieve An End. A Deliberate Planning Or System With A Goal…

Satan has devised a plan to hinder all of us from relating with God in and has done so by enticing us to sin or go back to a place of function 1st… both resulting in Shame, guilt and condemnation

Why Sin?
James 1.14 (NKJV) But each one is tempted when he is drawn away by his own desires and enticed.
James 1.15 (NKJV) Then, when desire has conceived, it gives birth to sin; and sin, when it is full-grown, brings forth death.

1John 3.20 (NKJV) For if our heart condemns us, God is greater than our heart, and knows all things.
1John 3.21 (NKJV) Beloved, if our heart does not condemn us, we have confidence toward God.

I Am Responsible To… Submit, Resist and REST!
James 4.7 (NKJV) Therefore submit to God. Resist the devil and he will flee from you.

1Pet. 5.8 (NKJV) Be sober, be vigilant; because your adversary the devil walks about like a roaring lion, seeking whom he may devour.
1Pet. 5.9 (NKJV) Resist him, steadfast in the faith, knowing that the same sufferings are experienced by your brotherhood in the world.

“Resisting” Is Our Responsibility… Not God’s…
But its not from a place of defeat, but from the place of an overcomer. A place of REST… the key to resisting is to learn to REST when the enemy comes knocking at your door.

Satan Specializes Is coming for your mind… Deception through suggestion

Satan Knows Exactly What Thoughts, Or Suggestions, To Send In Order To Keep Our Mind From Spiritual Things…

He “Infiltrates” The Minds Of God’s People, If They Allow Him To… That is the battlefield… Our Mind is where He attacks…

Psa. 105.19 (NKJV) Until the time that his word came to pass, The word of the LORD tested him. = upgrades await us

2Cor. 10.5 (NKJV) casting down arguments and every high thing that exalts itself against the knowledge of God, bringing every thought into captivity to the obedience of Christ,

Col. 3.1 (NKJV) If then you were raised with Christ, seek those things which are above, where Christ is, sitting at the right hand of God.
Col. 3.2 (NKJV) Set your mind on things above, not on things on the earth.

So How do you resist???? STAND FAST IN FAITH…

Faith… is a perspective you live from – living from Heaven’s view of why we’re here and where we are going.

When you walk by faith you don’t know how to look any where else.

Faith is…
embracing Him the author and perfector of our faith,
holding on to & standing firm in our Father’s perspective.
Resting in the stunning realization of how God really sees us – such that what I have “seen” changes the way that I live.

Its a relational response that arises out of our love relationship with God, when God’s heart and His will for a situation is known;

Faith is Knowing that…
God is always good.
God always has our best in mind.
God is always setting us up to succeed.
And responding accordingly.

Faith is the readiness, the preparedness of my heart to receive what Christ has already accomplished, already paid for; a knowing in your heart.

We’re not trying to have faith. Faith is the result of knowing Him. The more I know Him and understand His compassion and His heart and His motive in sending the Son, faith is an automatic thing. It works through love. Faith doesn’t come because I have a pressing need. That’s called fear and desperation. Faith comes because I have been with Him.

Rom. 12.2 (NKJV) And do not be conformed to this world, but be transformed by the renewing of your mind, that you may prove what is that good and acceptable and perfect will of God.

Eph. 4.21 (NKJV) if indeed you have heard Him and have been taught by Him, as the truth is in Jesus:
Eph. 4.22 (NKJV) that you put off, concerning your former conduct, the old man which grows corrupt according to the deceitful lusts,
Eph. 4.23 (NKJV) and be renewed in the spirit of your mind,
Eph. 4.24 (NKJV) and that you put on the new man which was created according to God, in true righteousness and holiness.