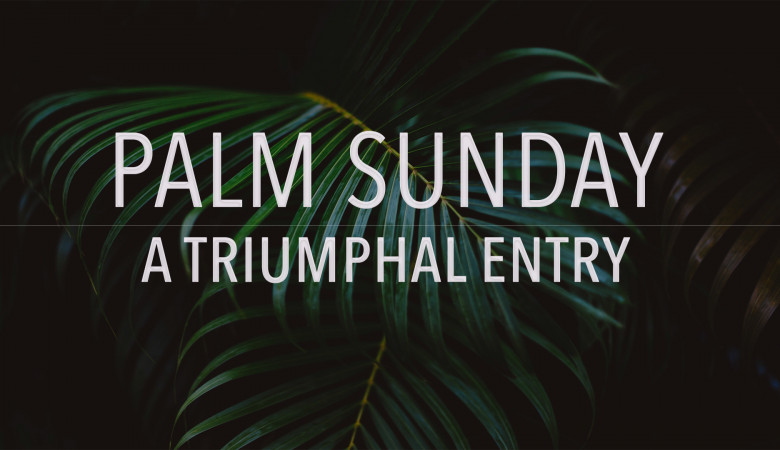 Palm Sunday – 1. You Are Forgiven!

Today we remember & celebrate what is known as Palm Sunday…

We are 5 days away from Jesus being crucified & the Passover being celebrated. And 7 days away the most significant event in our heritage. The resurrection of Jesus Christ.

There was energy, expectation, and a hope that soon Jesus would take over and be their King for good!! No longer would they be under the Roman empire.

But there was a greater purpose on this day. An opportunity God was giving to RECOGNIZE and CELEBRATE the true purpose for Christ coming… Not to build a kingdom on this earth but a kingdom that would be placed within the hearts of men… A Kingdom that would transform us into His redeemed sons and daughters. Who no longer live for this life and what it can give but we live for Eternity and the rewards that await us.

It is important to note, As you may or may not know, at the beginning of Jesus’ ministry, he avoided recognition/“publicity.” But now he came near because it was His Father’s will… he proceeded out of duty… knowing He was going to be celebrated although He was not seeking recognition or to be celebrated… He simply came to be in line with the father’s will.

Jesus’ entry into Jerusalem was the obedient thing for him to do… He knew what was in truly in store for him in the city, but he went anyway… celebration was soon turn to suffering!

Have you ever felt like obeying God is difficult because of the potential consequences or pain? I know what that is like.

Obedience to the Father’s Will is ALWAYS worth it!!!!

Look with me at John 12 –
John 12.1 (NKJV) Then, six days before the Passover, Jesus came to Bethany, where Lazarus was who had been dead, whom He had raised from the dead.

John 12:12 (nkjv) the next day a great multitude that had come to the feast, when they heard that Jesus was coming to jerusalem,
John 12:13 (nkjv) took branches of palm trees and went out to meet him, and cried out: “hosanna! ‘blessed is he who comes in the name of the lord!’ the king of israel!”

“palm branches”… this was a royal carpet that they made for him, out of palm branches… they were a symbol of victory and triumph… it a common context they were waved triumphantly as a king rode through the streets… palm Sunday was a day of welcoming Jesus as a great conqueror and almighty deliverer… But not from their sins… they wanted him to deliver and save them from Rome…

“hosanna”… means to deliver or save us now… it is used as a cry of acclamation and adoration… they wanted to be freed from the ruling hand of rome, their difficult circumstances and be the #1 people of the earth all over again…

Zech. 9.9 (NKJV) “Rejoice greatly, O daughter of Zion! Shout, O daughter of Jerusalem! Behold, your King is coming to you; He is just and having salvation, Lowly and riding on a donkey, A colt, the foal of a donkey.

“colt/donkey”… the true concept of Christ was symbolized by the riding of the young colt (donkey)… In ancient days the colt was a noble animal… note: it was used as a beast of service to carry the burdens of men, but more significantly it was used by kings. When they entered a city in peace, they rode a colt to symbolize their peaceful intentions…
***this differed dramatically from a conquering king. When a king entered a city, as a conqueror, he rode a stallion.

PEACE… Jesus came to restore PEACE between us & the Father…

Peace or shalom… means nothing broken or missing between you and God… wholeness, completeness and soundness; it’s a restored relationship with god… no longer our judge, but now our father… you now can enjoy all that is good because of your right relationship with god…. It is the absence of inward conflict, condemnation, and shame, but rather a state of rest, enjoyment, and confidence…

Rom. 5:1 (TPT)
5 Our faith in Jesus transfers God’s righteousness to us and he now declares us flawless in his eyes. This means we can now enjoy true and lasting peace with God, all because of what our Lord Jesus, the Anointed One, has done for us.

Eph. 2:13-14 (TPT)
13 Yet look at you now! Everything is new! Although you were once distant and far away from God, now you have been brought delightfully close to him through the sacred blood of Jesus—you have actually been united to Christ! 14 Our reconciling “Peace” is Jesus! He has made Jew and non-Jew one in Christ. By dying as our sacrifice, he has broken down every wall of prejudice that separated us and has now made us equal through our union with Christ.
(PEACE IS RELATIONAL NOT CIRCUMSTANTIAL)

Col. 1:20 (nkjv) and by him to reconcile all things to himself, by him, whether things on earth or things in heaven, having made peace through the blood of his cross.

the colt was also a symbol of SERVICE… Jesus came to SERVE by carrying the burden of mankind… SIN.

Sin penetrated the bloodstream of mankind and corrupted the thoughts, desires, passions, and life of every living man or woman on earth…

It darkened our hearts and blackened our record before God.

He was a ransom for us. He Is our Passover Lamb!!!
1cor. 5:7 (Nkjv) therefore purge out the old leaven, that you may be a NEW lump, since you truly are unleavened (clean). For indeed Christ, our Passover, was sacrificed for us.

Jesus was the living fulfillment of every legal requirement of God’s righteous standard… He was the Passover lamb, the lamb that God had chosen so we could be freed from the wrath to come and enjoy a new and perfect relationship with the Father.

Jesus, the Lamb of God, sacrificed Himself to set you free. And when the Son sets you free, you are free indeed!

The hebrew word for passover is pesach, which means “to pass or hover over.” this word speaks to us about two things…

Only those households with the blood of the Passover lamb on their doorposts were spared
1 Peter 1:18-20 The Passion Translation (TPT)
18 For you know that your lives were ransomed once and for all from the empty and futile way of life handed down from generation to generation. It was not a ransom payment of silver and gold, which eventually perishes, 19 but the precious blood of Christ—who like a spotless, unblemished lamb was sacrificed for us.[a]

If God can accept the blood as a payment for our sins and as the price of our redemption, then we can rest assured that the debt has been paid. If God is satisfied with the lamb and the blood that was shed, then the blood must be acceptable to us as well!

Rev. 5.12 (NKJV) saying with a loud voice: “Worthy is the Lamb who was slain To receive power and riches and wisdom, And strength and honor and glory and blessing!”

What does this mean for those who embrace Jesus as the Lamb!

Forgiveness has been granted & a New Life has been Promised!

1John 2:1-2,12 (TPT)
You are my dear children, and I write these things to you so that you won’t sin. But if anyone does sin, we continually have a forgiving Redeemer[a] who is face-to-face with the Father:[b] Jesus Christ, the Righteous One. 2 He is the atoning sacrifice[c] for our sins, and not only for ours but also for the sins of the whole world.[d]
12 I remind you, dear children:[a] your sins have been permanently removed because of the power of his name.[b]

Heb. 8.12 (NKJV) For I will be merciful to their unrighteousness, and their sins and their lawless deeds I will remember no more.”

Col. 2:13-15 (TPT)
13 This “realm of death” describes our former state, for we were held in sin’s grasp.[a] But now, we’ve been resurrected out of that “realm of death” never to return, for we are forever alive and forgiven of all our sins!
14 He canceled out every legal violation we had on our record and the old arrest warrant that stood to indict us. He erased it all—our sins, our stained[b] soul—he deleted it all and they cannot be retrieved! Everything we once were in Adam[c] has been placed onto his cross and nailed permanently there as a public display of cancellation.
15 Then Jesus made a public spectacle of all the powers and principalities of darkness, stripping away from them every weapon and all their spiritual authority and power[d] to accuse us. And by the power of the cross, Jesus led them around as prisoners in a procession of triumph. He was not their prisoner; they were his![e]

My New Life Comes With 3 Things –

He replaces my bad heart & gives you a brand new heart with new desires.

He clears my bad Record and I now stand justified before God.

He makes a new covenant with me based upon the Lamb and not based upon my performance.

How will you respond today?

For those who never have – Surrender.

For those who have before – Believe.