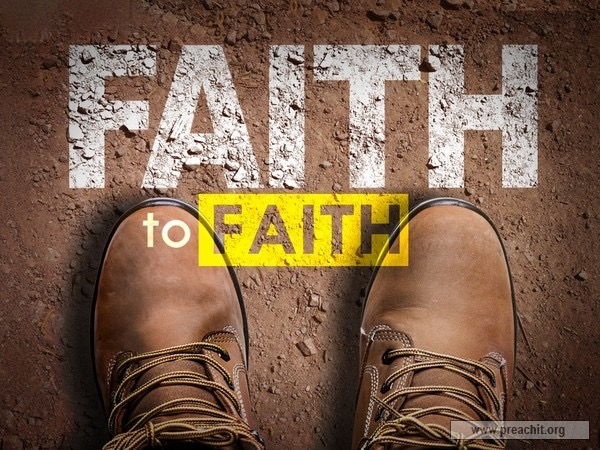 Rom. 1.16 (NKJV) For I am not ashamed of the gospel of Christ, for it is the power of God to salvation for everyone who believes, for the Jew first and also for the Greek.
Rom. 1.17 (NKJV) For in it the righteousness of God is revealed from faith to faith; as it is written, “The just shall live by faith.”

Today I am going to dive into a particular side of life that is vital to your growth in Christ and walking in the very things that are already yours.

Let me repeat, Already yours!

I believe its time for this particular set of messages to be Injected Into our community.

That we begin or continue to learn how to live the new life that has been given to us?

To finally know how to overcome and conquer fear, anxiety & worry once and forever.

To learn how to experience true Joy that is not dictated by our circumstances
To possess a Peace that is not moved by the winds and the waves of life.
And develop a faith and trust that looks at every problem with excitement and wonder.

I know you might be feeling like, “I am so far from that Justin”, But I can assure you that you are not. And today you will be one step closer to living a life that is not governed by circumstances but governed from within.

Imagine life for a moment through the eyes of Jesus. A man who didn’t worry,
who didn’t freak out when negativity hit his life and
one who was not moved by the accusations and hurts of others.

1John 4.4 (NKJV) You are of God, little children, and have overcome them, because He who is in you is greater than he who is in the world.

I know you have heard that passage or read it a few times, but do you BELIEVE those words?

The greater one lives in you! And he is greater than the one who attempts to distract you, torment you and constantly is poking you. To move you out of the realm of faith and into the realm of emotions. That’s where he thrives.

This verse means that he (the enemy) has no power or authority over you. None. He can only do as much as we allow him to operate in our mind. He is powerless. And He knows it.
And He knows that you are a child of God and possess the greater one on the inside of you. He knows all that & is doing everything He can to keep you from BELIEVING it.

Simply, its who we are and the calling that has been placed upon our life as a believer.

2Tim. 1.9 (NKJV) who has saved us and called us with a holy calling, not according to our works, but according to His own purpose and grace which was given to us in Christ Jesus before time began,

We therefore must stand firm in, walking in our true identity and purpose.

Col. 2.6 (NKJV) As you therefore have received Christ Jesus the Lord, so walk in Him,
Col. 2.7 (NKJV) rooted and built up in Him and established in the faith, as you have been taught, abounding in it with thanksgiving.
Col. 2.8 (NKJV) Beware lest anyone cheat you through philosophy and empty deceit, according to the tradition of men, according to the basic principles of the world, and not according to Christ.
Col. 2.9 (NKJV) For in Him dwells all the fullness of the Godhead bodily;
Col. 2.10 (NKJV) and you are complete in Him, who is the head of all principality and power.

The very life, our new life, is one that has been fully restored through the blood of Jesus. We now can enjoy and rest in the finished work of Christ

Everything Jesus deserves is now granted to me and everything I deserved was received by Christ.

He exchanged His life for mine. His righteousness for my sin.

I am now called to receive Him and walk in Him. And this can only be done by faith.

Gal. 2.20 (NKJV) I have been crucified with Christ; it is no longer I who live, but Christ lives in me; and the life which I now live in the flesh I live by faith in the Son of God, who loved me and gave Himself for me.

Gal. 3.11 (NKJV) But that no one is justified by the law in the sight of God is evident, for “the just shall live by faith.”

So what is faith?

Faith is responding. Not initiating. God is always the initiator. Always!

Faith… is a perspective you live from – living from Heaven’s view of why we’re here and where we are going.

When you walk by faith you don’t know how to look any where else.

Faith is…
embracing Him the author and perfector of our faith,
holding on to & standing firm in our Father’s perspective.
Resting in the stunning realization of how God really sees us – such that what I have “seen” changes the way that I live.

Its a relational response that arises out of our love relationship with God, when God’s heart and His will for a situation is known;

Faith is Knowing that…
God is always good.
God always has our best in mind.
God is always setting us up to succeed.
And responding accordingly.

Faith is the readiness, the preparedness of my heart to receive what Christ has already accomplished, already paid for; a knowing in your heart.

We’re not trying to have faith. Faith is the result of knowing Him. The more I know Him and understand His compassion and His heart and His motive in sending the Son, faith is an automatic thing. It works through love. Faith doesn’t come because I have a pressing need. That’s called fear and desperation. Faith comes because I have been with Him.

Eph. 3.17 (NKJV) that Christ may dwell in your hearts through faith; that you, being rooted and grounded in love,
Eph. 3.18 (NKJV) may be able to comprehend with all the saints what is the width and length and depth and height—
Eph. 3.19 (NKJV) to know the love of Christ which passes knowledge; that you may be filled with all the fullness of God.
Eph. 3.20 (NKJV) Now to Him who is able to do exceedingly abundantly above all that we ask or think, according to the power that works in us,

Faith rejects anything less than what He proclaims about me

2Cor. 10.3 (NKJV) For though we walk in the flesh, we do not war according to the flesh.
2Cor. 10.4 (NKJV) For the weapons of our warfare are not carnal but mighty in God for pulling down strongholds,
2Cor. 10.5 (NKJV) casting down arguments and every high thing that exalts itself against the knowledge of God, bringing every thought into captivity to the obedience of Christ,

Satan wants to steal your confidence before God

This fight is a fight of faith. It’s Not a fight against the devil. He is not the issue. The fight is to BELIEVE what God said and what Jesus did for us and to respond accordingly.

Are you beginning to see how this works?

Let me close with a well known story from the Bible –