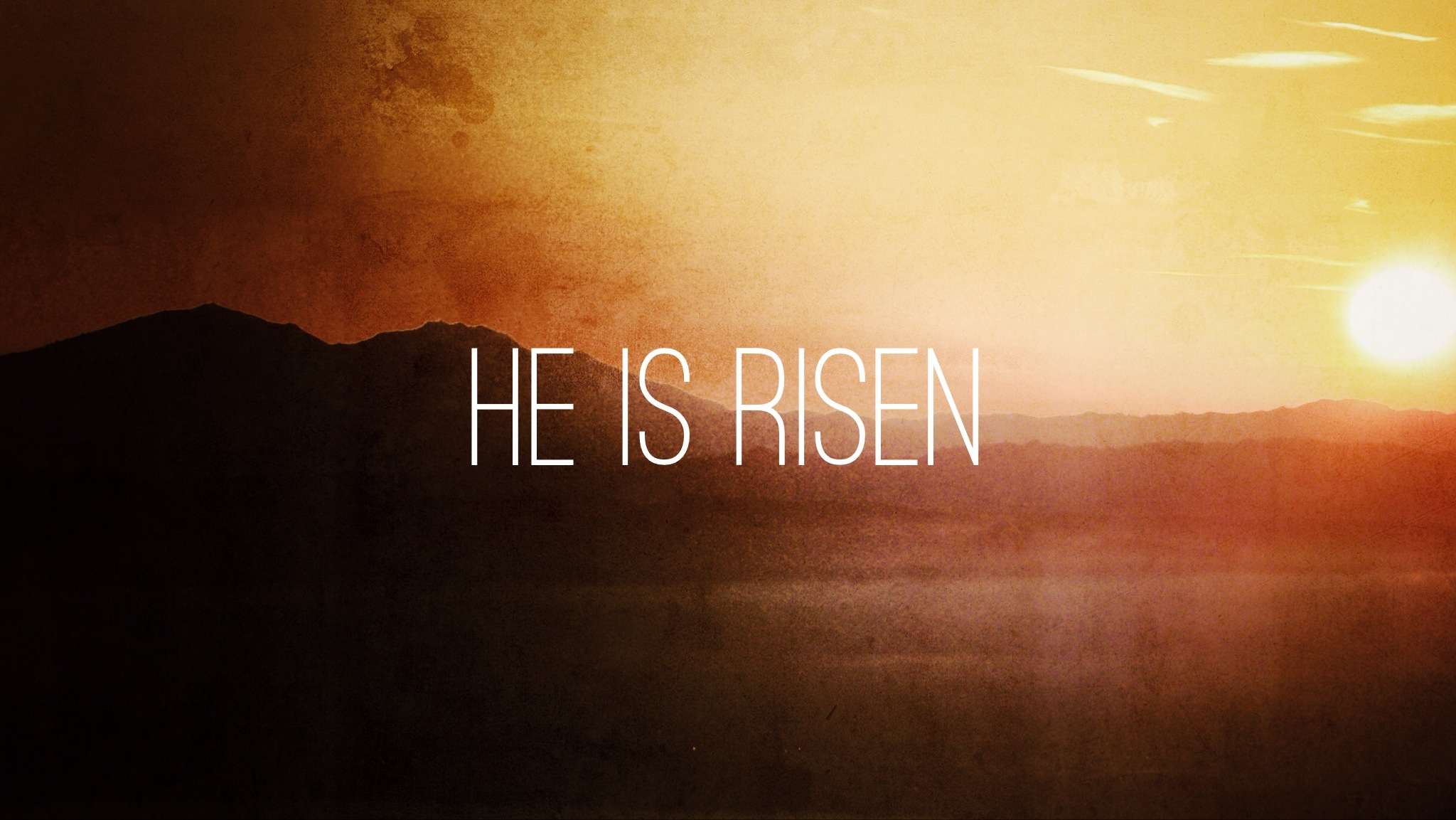 Easter – He Is Risen!

He is risen. The foundation of our Christian faith truly rests on those 3 words. He is Risen!

And Unless Jesus rose from the dead…

Everything hinges on the truth and reality… that He is risen. And all of us are left with those 3 words confronting us.

If He has risen then what do I believe? Will I embrace what He did for me or will I continue to live my own life according to my own rules in my own strength?

1Cor. 15:12-20 (TPT)
12 The message we preach is Christ, who has been raised from the dead. So how could any of you possibly say there is no resurrection of the dead? 13 For if there is no such thing as a resurrection from the dead, then not even Christ has been raised.[a] 14 And if Christ has not been raised, all of our preaching has been for nothing and your faith is useless. 15 Moreover, if the dead are not raised, that would mean that we are false witnesses who are misrepresenting God. And that would mean that we have preached a lie, stating that God raised him from the dead, if in reality he didn’t. 16 If the dead aren’t raised up,[b] that would mean that Christ has not been raised up either. 17 And if Christ is not alive, you are still lost in your sins and your faith is a fantasy. 18 It would also mean that those believers in Christ who have passed away[c] have simply perished. 19 If the only benefit of our hope in Christ is limited to this life on earth, we deserve to be pitied more than all others![d] 20 But the truth is, Christ is risen from the dead, as the firstfruit[e] of a great resurrection harvest of those who have died.

I am aware that before me sits individuals who come here from many different walks in life. With many different stories. Many different pasts. Some of you are filled to the brim with pain and struggle and disappointment. Others maybe filled with happiness and joy. That’s why the bible says “mourn with those who mourn and rejoice with those who rejoice”

I, we at New Day have committed to meet people right where they are. No hoops. No strings. Nothing. Just you and how you came.

Some of you are distant from God and others are gladly seeking after Him.

So as you listen to my words today, would you open up your heart, put down the walls and allow God to speak to you. Because He wants to. He just needs for you to let Him in and receive all that He for you today.

This morning will be a day to remember. For some, you will hear maybe for the first time the good news that is known as the gospel. You’ll be introduced to a God that you may not recognize or haven’t seen Him in this light before.
For others this message, hopefully the words I speak, may revive or resurrect what is dead & dormant in your life. Either way I believe God is going to move mightily this morning.

In your hearts and in your life.

This morning I am filled with High expectations of what God is attempting to infuse into our community. I believe He is and has been taking all of us on a journey of discovery – of Who He is for us (Father) and who we are to Him (children).

Sometimes we are overwhelmed by life. The crushing waves of disappointment, endless problems, debilitating illness, or trouble with other people can cause hopelessness, depression, and even despair.

But I want you to know today, and its not just a great bumper sticker, but CHRIST IS ENOUGH!!!!

Whatever our circumstances, Jesus is present with His love, compassion, and grace. He cares deeply for you today! Deeply. He knows your pain, he knows your questions, He knows how hard it has been for you.

Psa. 139.2 (NKJV) You know my sitting down and my rising up; You understand my thought afar off.
Psa. 139.3 (NKJV) You comprehend my path and my lying down, And are acquainted with all my ways.

And It’s the essence of the gospel is this – “Love has found a way!”

John 3.16 (NKJV) For God so loved the world that He gave His only begotten Son, that whoever believes in Him should not perish but have everlasting life.
John 3.17 (NKJV) For God did not send His Son into the world to condemn the world, but that the world through Him might be saved.
John 3.18 (NKJV) “He who believes in Him is not condemned; but he who does not believe is condemned already, because he has not believed in the name of the only begotten Son of God.

Love found a way! Where there was no other way.

We owed a debt we could not pay.
We served a law we could never measure up to!

As I read through the scripture and have done so for many years, I realize more and more that each page contains a thread of God’s Redemptive love for His people.

He is madly in love with His people. With you. He loves you deeply and relentlessly.

But God’s love for us was never meant to keep us from tough times; But it will always give us the strength to make it through the most difficult times of life.

He is relentless in LOVING you and has done everything to set you up for a relationship with Him.

John 14.6 (NKJV) Jesus said to him, “I am the way, the truth, and the life. No one comes to the Father except through Me.

God is offering to each of us today a NEW DAY!!!

A new outlook on life. His outlook. Empowered by His Spirit. So that life no longer dictates how you are, but Truth now does.

Turn with me to, & as we look at this passage put yourself into the shoes of this young man for a moment.
Luke 15.11 (NKJV) Then He said: “A certain man had two sons.
Luke 15.12 (NKJV) And the younger of them said to his father, “Father, give me the portion of goods that falls to me.’ So he divided to them his livelihood.
Luke 15.13 (NKJV) And not many days after, the younger son gathered all together, journeyed to a far country, and there wasted his possessions with prodigal living.
Luke 15.14 (NKJV) But when he had spent all, there arose a severe famine in that land, and he began to be in want.
Luke 15.15 (NKJV) Then he went and joined himself to a citizen of that country, and he sent him into his fields to feed swine.
Luke 15.16 (NKJV) And he would gladly have filled his stomach with the pods that the swine ate, and no one gave him anything.
Luke 15.17 (NKJV) “But when he came to himself, he said, ‘How many of my father’s hired servants have bread enough and to spare, and I perish with hunger!
Luke 15.18 (NKJV) I will arise and go to my father, and will say to him, “Father, I have sinned against heaven and before you,
Luke 15.19 (NKJV) and I am no longer worthy to be called your son. Make me like one of your hired servants.” ’
Luke 15.20 (NKJV) “And he arose and came to his father. But when he was still a great way off, his father saw him and had compassion, and ran and fell on his neck and kissed him.
Luke 15.21 (NKJV) And the son said to him, “Father, I have sinned against heaven and in your sight, and am no longer worthy to be called your son.’
Luke 15.22 (NKJV) “But the father said to his servants, ‘Bring out the best robe and put it on him, and put a ring on his hand and sandals on his feet.
Luke 15.23 (NKJV) And bring the fatted calf here and kill it, and let us eat and be merry;
Luke 15.24 (NKJV) for this my son was dead and is alive again; he was lost and is found.’ And they began to be merry.

FORGIVENESS HAS BEEN GRANTED.

No longer GUILTY before God. (He is your Father, no longer your judge)
No longer DISTANT from God.
No longer an ORPHAN in search of a Family & Home.

FORGIVENESS MEANS YOU CAN NOW HAVE…
a New relationship with God.
a New Hope for tomorrow.
a New Freedom from your past.
a New ability to Love yourself & others.

FREEDOM FROM SELF, SIN & HELL.

I am now free from others so I can love them freely!!!

Not a liberty to do as your “old past man” desires, but to now we can live FREELY for God.
Galatians 5:1 –
Let me be clear, Jesus has set us free—not partially, but completely and wonderfully free! We must always cherish this truth and stubbornly refuse to go back into the bondage of our past.

It is for freedom that Christ has set us free!

That is God’s true desire for each and every one of us – to embrace and walk in our freedom.

The liberation that Christ brings is real, its complete and its absolute! But each of us is in the process of coming into the fullness of our freedom
John 8:32 –
32 For if you embrace the truth, it will release more freedom into your lives.”[a]

So Stand fast in your new found freedom. Rise up and be the son and daughter God is calling you to be! Plant your feet firmly therefore within the freedom that Christ has won for us, and do not let yourselves be caught again in the shackles of slavery.